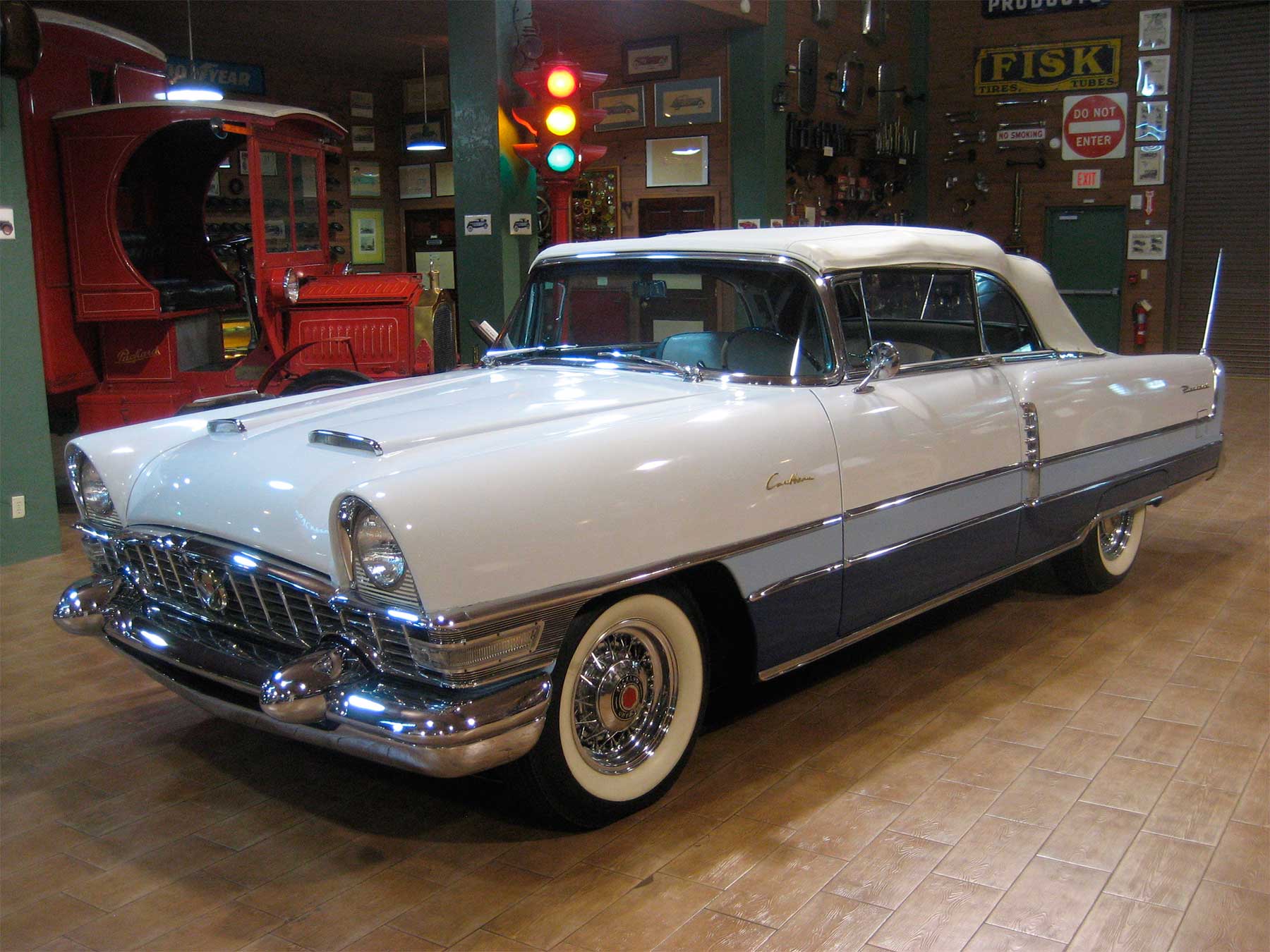 The Packard Caribbean Convertible Coupe – 5588 (1955) was a stunning tri-colored convertible, powered by a brand new 352-cid, 275-hp OHV V-8 with dual four-barrel carburetors. Every power option was standard, except for air conditioning, and the car rode on electronically operated, self-leveling torsion bar suspension.

The Caribbeans were white over black with the third color – blue, green, red or pink, placed between the other two on a wide band that ran the length of the car at waist height, sweeping up over the rear fins to the twin antennas. “Cathedral window” rear taillights topped bumpers, through which the exhaust exited. Production was limited to 500 Caribbeans, which cost almost $6,000 – again nearly $2,000 more than a 1955 Cadillac convertible.

The new Packard V-8 encountered problems with oil pumps that were not powerful enough, and valve trains were starved to disastrous ends as a result. The electronic self-leveling suspension system also tended to fail on occasion due to bad ground connections. These troubles, coupled with the car’s high price, irreparably harmed its reputation, and ultimately spelled the end of the model.
Optional Equiptment

500 units of the 5580 model were manufactured, including this Caribbean Convertible.

The 55th Senior Series models are a major facelift of the 1951-54 shell, but trunk lid and handle are carried-over from previous Series.

Trunk lid is shorter than those on closed cars to accommodate convertible stack – as is windshield.

Vee motif used throughout the car to tout the all-new Packard V8 motor, fitted with dual 4-barrel carburetors and backed by the new Twin Ultramatic automatic transmission as standard equipment.

Hood is distinguished from other Packard/Clipper models by a pair of stampings that terminate in faux scoops, and a prop rod is provided.

While PACKARD is spelled out in chrome letters across the hood of other Packard models, they are not used here (though the inner hood reinforcement has provision for them). Ribbed stainless side trim is not used, creating a third area for exterior color – available in four standard tri-tone paint schemes, though other color combinations could be ordered.

Fender skirts and lower body moldings are standard. Cathedral-style taillights are an instant classic. Dual rear radio antennae are standard (though only one provides signal to receiver).

All exterior script plates are gold-plated, but none are used on trunk lid.

All-new Torsion-Level suspension is standard. (NOTE: While a few 55th Series Caribbean hardtops are known to exist, these were not standard production models, but converted from 55th Series Four Hundreds – likely done by dealers.)