BXR Motors began with an average, American man and his dream to personally build a truly great American supercar. The man behind the car is Neal Bailey.

Neal is a self-proclaimed “gear head” with a lifelong passion for cars. From an extremely young age, Neal showed serious interest in cars and understanding exactly “how things work”, in his own words. Neal still recollects on how during his childhood he would take apart his parents new electronics just in order to put it back together to understand how it worked. His first car, a 1972 Convertible Mustang Spirit Edition, was his first garage project and the spark that set fire to Neal’s automobile passion. Decades and dozens of cars later, Neal took a serious personal leap of faith and embarked on a life-changing project.

In 2008, Neal left his comfortable, stable job as a web developer and invested all his personal savings into the designing and building of the Bailey Blade XTR. Neal wanted to combine the best design features of some of the cars he grew up loving while achieving a perfect marriage of performance and appearance. His inspiration for the Bailey Blade XTR came from automobiles across the board, classic and new, domestic and foreign. Neal used everything from classic American muscle cars to sleek, luxurious exotics to pull design ideas and elements from in the design of the Blade. He wanted to revitalize and recreate the image of what an “American supercar” should be. 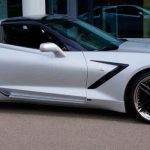 There are not too many models that give a designer the opportunity to design a super sports car. The C7 with its transaxle … Read more “