The Markranstädter Automobilfabrik (MAF) was a German company in Markranstädt that produced automobiles between 1909 and 1923.

Hugo Ruppe founded the Markranstädt automobile factory in 1909, and the cars produced by the company were sold under the MAF brand. In 1911 Ruppe had to file for bankruptcy, but the company was acquired by a group of investors and could continue to exist under Ruppe's technical management. After the outbreak of war in 1914, Ruppe was called up as a soldier and production was interrupted due to the war.

Apollo-Werke AG, which emerged from another company of the Ruppe family and had its headquarters in Apolda, took over the company in 1921 and continued operations in Markranstädt as Plant II. Production ended in 1923.

An example of the type F 5/14 HP from 1914 is exhibited in the Cité de l'Automobile in Mulhouse, France. The city of Markranstädt owns two vehicles. In addition, a collector in Saxony still has a copy of this car brand and another (type 5/14) in Echternacherbrück. 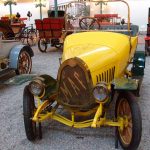 The Markranstädter Automobilfabrik is a former producer of automobiles from Markranstädt, Germany, which was active between 1909 and 1923.