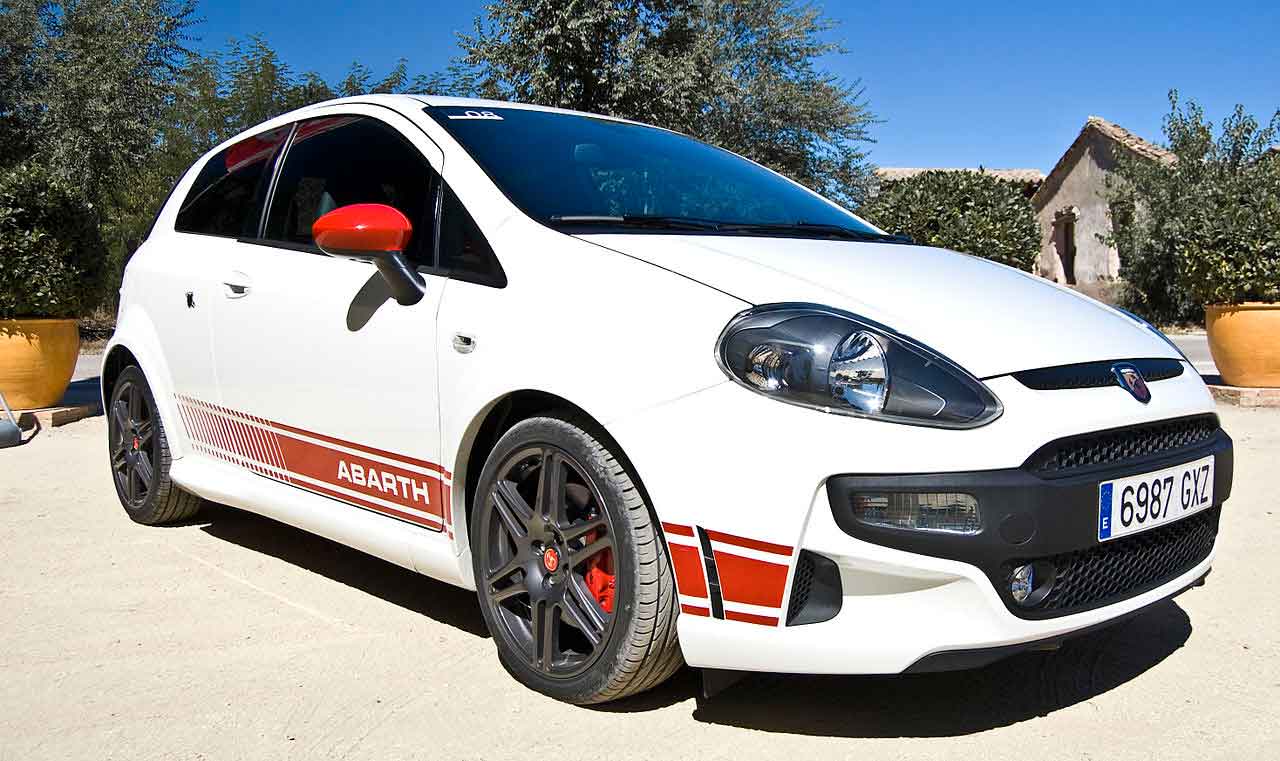 The EVOlution of competition-inspired technology

The 165 hp Multiair 1.4 turbo petrol engine is the result of a winning partnership between Fiat Powertrain technology and Abarth technical knowledge.

Since the Fiat Powertrain engine was first presented at the Geneva Motor Show, Abarth engineers have been working hard to squeeze every last drop of power and to improve its sporting performance in the typical Abarth style.

Multiair engine technology revolutionized the world of gasoline engines. Compared to a conventional petrol engine of equivalent size, a MultiAir engine develops more power (up to 10%) and more torque (up to 15%), while consuming much less (up to 10%) and emitting less CO2 (up to 10%), less particulate matter (up to 40%) and less NOx (up to 60%).

The genius of the Multiair engine is reflected in its electro-hydraulic valve control system. Both fuel consumption and pollutant emissions have been reduced by using the engine’s intake valves to control the airflow directly, without a throttle valve in the intake. Using this already advanced technology as a starting point, Abarth’s development department made a series of modifications to arrive at the innovative new 165 hp 1.4 16 V Multiair. The power, for example, was optimised thanks to the intelligent application of a new, larger Garrett turbocharger. The result was excellent performance with a maximum torque of 250 Nm (25.5 kgm) at 2,250 rpm and acceleration from 0 to 100 km/h in just 7.9 seconds.

The mode selector is located in the central tunnel in front of the gear lever and allows you to switch between the two modes quickly and easily by simply moving a lever. The currently selected mode is displayed on the dashboard. If you’re looking for a safe and relaxing ride, all you have to do is select Normal mode, while if you feel the need to enjoy the full performance of your Abarth Punto Evo, switch to Sport position and enjoy the power. The Sport mode makes the car more responsive, using electric servo systems to modify the handling and deliver the ultimate sporty feel. Of course, due attention was also paid to safety, so the Sport mode also activates the TTC system automatically.

As in rally cars, the driver is assisted by the GSI (Gear Shift Indicator). In the Abarth Punto Evo, the GSI acts as an intelligent “co-driver” and provides a signal on the dashboard to warn you when the time has come to shift to a higher gear by reducing fuel consumption.

Abarth Punto Evo’s 1.4 Multiair petrol engine also incorporates Fiat’s innovative Start&Stop system. This automatically shuts off the engine when the vehicle stops and the engine is left at idle, and restarts it as soon as you are ready to move. The system finds its ideal application in situations such as city traffic and traffic light sequences. Whenever the control logic allows, Start&Stop automatically shuts off the engine, saving up to 10% of fuel consumption and emissions in the city cycle and up to 3.5% in the NEDC test cycle.

As soon as the foot is removed from the brake or the first gear is engaged, the system immediately restarts the engine to provide instantaneous power and responsiveness. In addition, if you accidentally turn the engine off while driving away, all you have to do is press the clutch to restart it automatically.

Start&Stop offers additional advantages in terms of comfort, as it eliminates noise and vibrations from the passenger compartment while the car is stationary.

The system is fully interactive and tells you whether or not the function is activated by clear indications on the instrument panel. The Start&Stop can be quickly and easily switched off with a switch on the dashboard near the steering column.

The EVOlution of active and passive safety

Abarth’s philosophy combines performance and safety. Therefore, the Abarth Punto Evo is equipped with a series of highly efficient systems to ensure safe handling on all surfaces.

The TTC (Torque Transfer Control) is the key to the active safety of the vehicle. The TTC improves torque transfer from the engine to the wheels and ensures excellent cornering handling, making fast driving safer and more fun than ever before. The TTC is a differential lock system that uses the mechanical differential as a reactive transmission element to control torque through the braking system and ESP sensors (wheel speed, steering angle, yaw, etc.).

The TTC is automatically activated in Sport mode. When activated, the system automatically adjusts the degree of differential lock applied according to dynamic factors such as speed.

In the area of safety, the Abarth Punto Evo set new standards with its 7 airbags, including a knee airbag for the driver. The Punto Evo was one of the few cars in its segment with a driver’s knee airbag as standard in all versions.

The Abarth Punto Evo also has a powerful and efficient braking system. Disc brakes are mounted on all wheels, with ventilated discs and Brembo double piston, with fixed calipers at the front. The suspension system is derived from a proven Abarth configuration. The front suspension is equipped with independent McPherson struts, while the rear suspension is semi-independent with a torsion bar. Abarth has also installed a larger stabilizer bar along with front springs that are 20% harder than a standard suspension system. The result is a flawless grip and a high level of passenger comfort.

The EVOlution of racing aerodynamics

Also in terms of style, Abarth’s changes to the Punto Evo focus on improving the car’s performance and aerodynamics.

Compared to the Fiat version of the car, the front bumper was extended in width to incorporate the side wings. The black intake hood on the front was also made deeper to match the side air vents. This corrected and controlled the airflow and significantly improved the aerodynamic efficiency around the sides of the car, as in the full version of the rally.

The rear of the Abarth features a completely redesigned bumper with side air vents. The diffuser, designed to optimize airflow, is an important feature of the bumper. The diffuser is the same as in the previous version, but has been given a new frame to improve its appearance and align its style with the front divider.

The exhaust has larger diameter twin exhaust pipes, an obvious tribute to the glorious history of Abarth. The new pipes, however, have received a different satin finish.

The reversing lights and rear fog lamps moved towards the centre of the diffuser, forming a focal point as in formula racing cars, while the new side reflectors profiled and accentuated the profile of the aerodynamic deflector, simulating the effect created by the LED hood light in the rear window.

The wing was completely redesigned, not only in color (it was now the same color as the rest of the body, giving the car a longer, more dynamic look), but also in size. Its longer, conical shape has improved the car’s CX and CZ values and made the new Abarth Punto EVO more stable than its predecessor.

The logo has also been redesigned and combined with a new sportier-looking grille. In the same way, the badge is no longer round as in the previous version, but has returned to its original shape, as used in the 500.

The skirts and side skirts are finished in the same color as the body, which highlights the aggressiveness of the car and its behavior “stuck to the road. The side graphics have also been redesigned to match the front bumper and have been given new dimensions. The result is more proportional to the side of the car and gives the body color areas a more elegant look. Another novelty was the completely redesigned 17” spoked wheels, with the Abarth Scorpion logo in the centre.

The interior of the car was also completely upgraded. The new materials have an appearance and finish inspired by the surface of car racing circuits, bringing all the excitement from the track to the car.

The central control console is divided into two sections. The audio section features a black surface and a central LCD screen. Underneath, a separate section houses the air conditioning controls. At the top of the console are ventilation grilles and a storage compartment.

The visual link to the new textured seats is obvious. The seats and backrests are upholstered in soft black leather, while the sides are at the back of the seat.

The EVOlution of power – the SS kit –

As expected from Abarth, he made available a high performance kit to coincide with the launch of the Abarth Punto Evo to further increase engine power. Following the Abarth tradition, the tuning kit gave the new car more power than the basic model, allowing the Multiair 1.4 16v Turbo engine to develop a maximum power of 180 hp.

As for the Grande Punto and the 500, the Abarth Punto Evo – SS kit – came in a classic wooden case. To ensure the highest standards of quality and safety, the kit could only be installed by Abarth’s official tuning network.