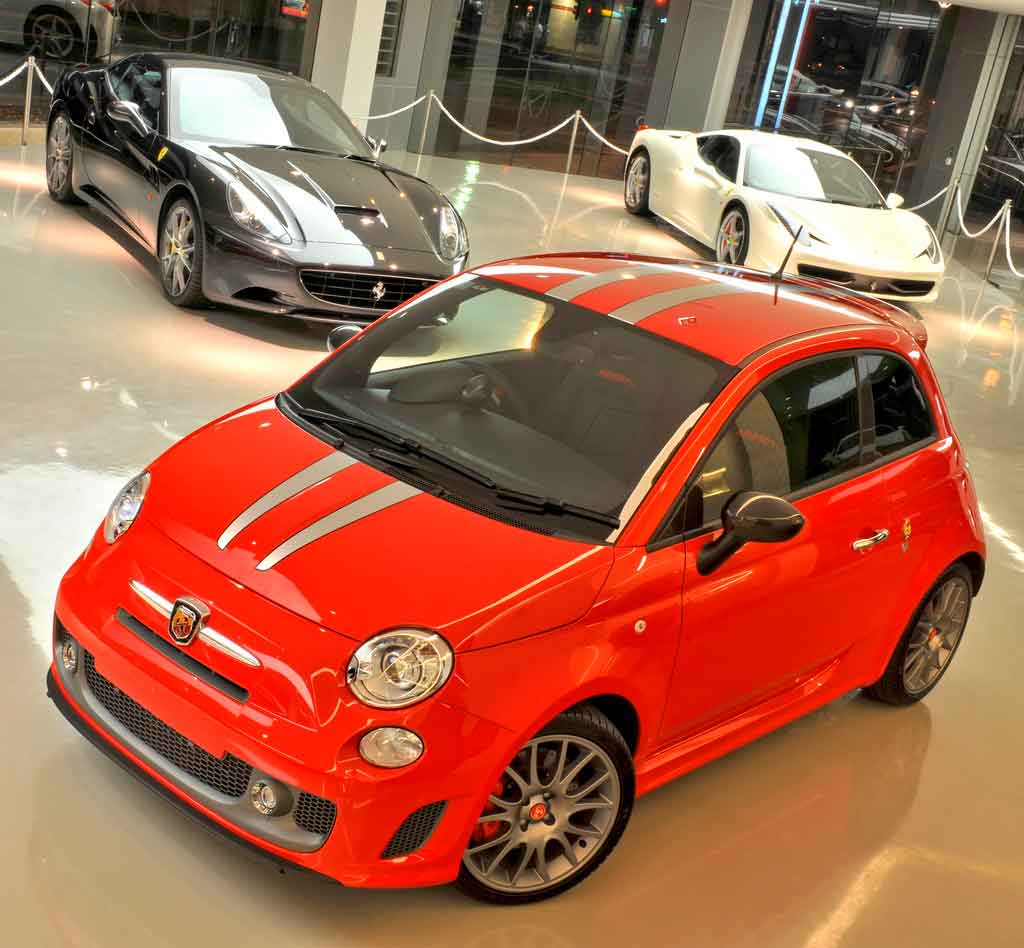 The Abarth 695 Tributo Ferrari made its world debut in Frankfurt. This high-performance version of the Abarth 500 confirms the link between Abarth and Ferrari based on shared values that include a passion for performance, the soul of competition, attention to detail and Italian style.

Abarth and Ferrari are two great names who have contributed, with conviction and dedication, to the legend of Italian racing known around the world. The legendary men behind both brands followed very similar races: first drivers, then tuners and finally heads of companies that enjoy genuine respect in the world of motorsport. These extraordinary men were associated in the past: in 1953, for example, a unique Ferrari-Abarth was born, the Ferrari 166/250 MM Abarth. The car ran on several international trophies including the legendary Mille Miglia. The link between the two companies has been reinforced above all by the exhaust systems designed by Abarth specifically for the cars built in Maranello: numerous exhaust systems have been made for several Ferrari models, some of which have won World Championship titles.

The two brands renewed their collaboration. The first result was the supply of a limited and numbered series of Abarth 500 to European Ferrari dealers for use as “courtesy cars”.

The Abarth 695 Tributo Ferrari, an exclusive vehicle that not only allowed Abarth to expand its range by entering the luxury sports car market, but also offered Ferrari customers a small but exciting small car for all their mobility needs, including practical urban mobility.

It was distinguished by a series of stylistic changes, but above all by the substantial modifications developed by Abarth and Ferrari engineers. The engine, to begin with, is a 1.4 Turbo T-Jet 16v, tuned to develop more than 180 HP. This is combined with an electromechanical MTA (Manual Transmission Automated) gearbox with competition-inspired shovel gearbox that maximizes engine performance by reducing shift times.

To improve acceleration, the car was equipped with high-performance tyres on 17″ alloy wheels with a design inspired by Ferrari wheels. Suspension and braking systems were also reinforced to cope with the additional power: 284 mm multi-media discs with four-piston fixed calipers, both from Brembo, and special shock absorbers that allowed performance to be enjoyed in complete safety.

And, of course, there was a “dual-mode” “Record Monza” variable backpressure exhaust designed to improve engine performance and deliver inspiring sound at over 3,000 rpm.

The Abarth 695 Tributo Ferrari has a “SPORT” button on the dashboard that modifies engine response, gearbox and steering. It reaches a top speed of 225 km/h and accelerates from 0 to 100 km/h in 7.1 seconds – 6.9 seconds in SPORT mode.

On the outside, the car is finished in Scuderia red, with carbon fibre exterior mirrors and details such as wheels and rear air intakes in Grey Racing Grey. This Abarth is equipped with xenon headlamps with low beam and high beam functions to improve light emission and efficiency in all weather conditions. Manufactured by Magneti Marelli Automotive Lighting, these elements provide three times the light intensity and durability of standard halogen headlamps.

The interiors are also customized and demonstrate the attention to detail and sporty style common to both brands. The “Abarth Corsa by Sabelt” seats are equipped and finished in black leather with carbon fibre shell and seat base. These seats offer a perfect combination of racing characteristics: lightness (10 kg less than the standard seat) and the ability to keep the body stable against lateral and longitudinal forces, thanks to the body support elements filled with crush-resistant foam with the ergonomics and comfort of road seats.

The black leather steering wheel features red leather inserts and a tricolour hub on which the MTA’s gear levers are mounted, while the dashboard was specially manufactured by Jaeger and inspired by Ferrari instrumentation. Attention was also paid to details on the floor: the footrests are completely covered in non-slip aluminium and the racing pedals are personalised with the Scorpion logo. The interior is also decorated with other details, such as special plates and a plate with the vehicle’s serial number.