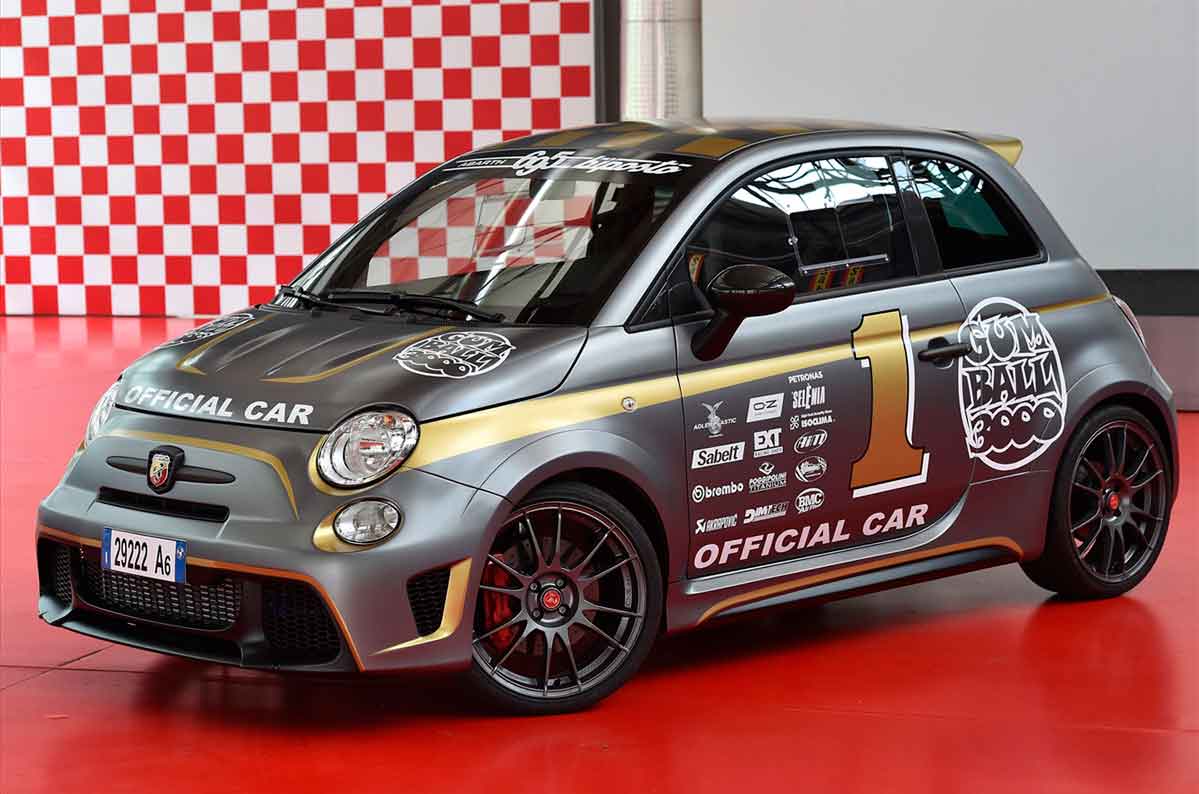 Great success for the Abarth brand, which achieved an authentic leading role in the world of supercars by taking part in the sixteenth edition of the Gumball 3000, the rally restricted to just 120 exclusive supercars that came to an end last night in Ibiza, having followed a route of over 5500 kilometres on a 7-day journey through the United States and Europe. Abarth accompanied the participants on all stages of the route as Official Automotive Partner of the 2014 edition: first in the United States (from Miami to New York, passing through Atlanta) with five cars from the US range and then in Europe when on June 8 the convoy flew across the Atlantic to arrive in Edinburgh, Scotland where awaiting it were no fewer than 8 Abarth cars.

Here, in the pouring rain, the crews of the Gumball 3000 were welcomed by the many fans who were also the first able to admire the Abarth 695 biposto,”the smallest supercar” which took to the road for the first time. Completing the Abarth fleet that covered the over 2700 km of the European portion – from Edinburgh to Ibiza, taking in London, Paris and Barcelona – were also five Abarth 595 MY 2014 and two Abarth 595 50th Anniversary cars representing the entire Abarth range.

Distinguished by a dedicated “Official Car” livery bearing the number #1, the Abarth 695 biposto was driven from Edinburgh to Barcelona via London and Paris by Maximillion Cooper (CEO and founder of the Gumball 3000). On the final journey, from Barcelona to Ibiza, the former British racing driver and entrepreneur left the wheel of the 695 biposto to a true legend of world motorcycling: Marco Luchinelli.

In each city the “Gumball” visited, Abarth played a leading role: Regent Street in London, the banks of the Seine in Paris, the tourist port of Barcelona and the old port of Ibiza welcomed hundreds of thousands of people and Abarth made every arrival an exciting, memorable event with its fantastic cars. Moreover, during stopovers the 695 biposto – the ‘most Abarth of all Abarths’ – was the focus of exclusive events (on the French Albi circuit and on that of the Top Gear magazine on the outskirts of London) which allowed a selected audience to admire it in its natural habitat: the track. But only the motorcycle racer Luchinelli and the driver Cooper were able to put it to the test on the roads between the Scottish capital and Ibiza, passing through London, Paris and Barcelona.

Launched in Geneva in March this year, the 695 biposto has already become an icon of the brand: its 190 HP, 1.4 T-Jet engine is the most powerful ever installed in a road-going Abarth. On top of that, the best weight-to-power ratio in its category (5.2 kg/HP) and an ability to accelerate from 0 to 100 km/h in just 5.9 seconds makes the Abarth 695 biposto the fastest front-wheel drive saloon on the market today. It is the first car in the world to offer an H-pattern gearbox with dog rings and polycarbonate side windows, both type-approved for road use. And in fact, it’s the road-going reinterpretation of the Abarth 695 Assetto Corse, competitor on racetracks throughout Europe and made in the Officine Abarth Mirafiori in Turin: craftsmanship and attention to detail, typical of Abarth’s most exclusive cars, meet the best of race car technology.

The Gumball 3000 was truly a unique and gripping adventure that all supercar fans followed on Abarth’s official channels and in the dedicated section of the www.abarth.com website, which also played the role of aggregator for all content produced in real time during the various stages.

The charity event organised by ‘Gumball 3000 Foundation’ was held yesterday in the exclusive setting of the island of Ibiza with a special hand-painted Abarth 500 auctioned for the first time by Christie’s, the world’s most prestigious auction house, confirming the brand’s unique value at an international level. The objective of the non-profit organisation is to offer opportunity, optimism and ambition to future generations by sponsoring underprivileged young people through education, infrastructures and environmental projects. It was precisely Maximillion Cooper who invited the famous American street artist Alec Monopoly to paint an Abarth 500 purchased by the Foundation as a symbol of the union between the worlds of art, cars and popular culture. The auction ended at 110,000 euros, with the Gumball Foundation choosing the Tony Hawk Foundation as the recipient of the proceeds. This charity was founded according to the wishes of the ex-skateboarding champion.