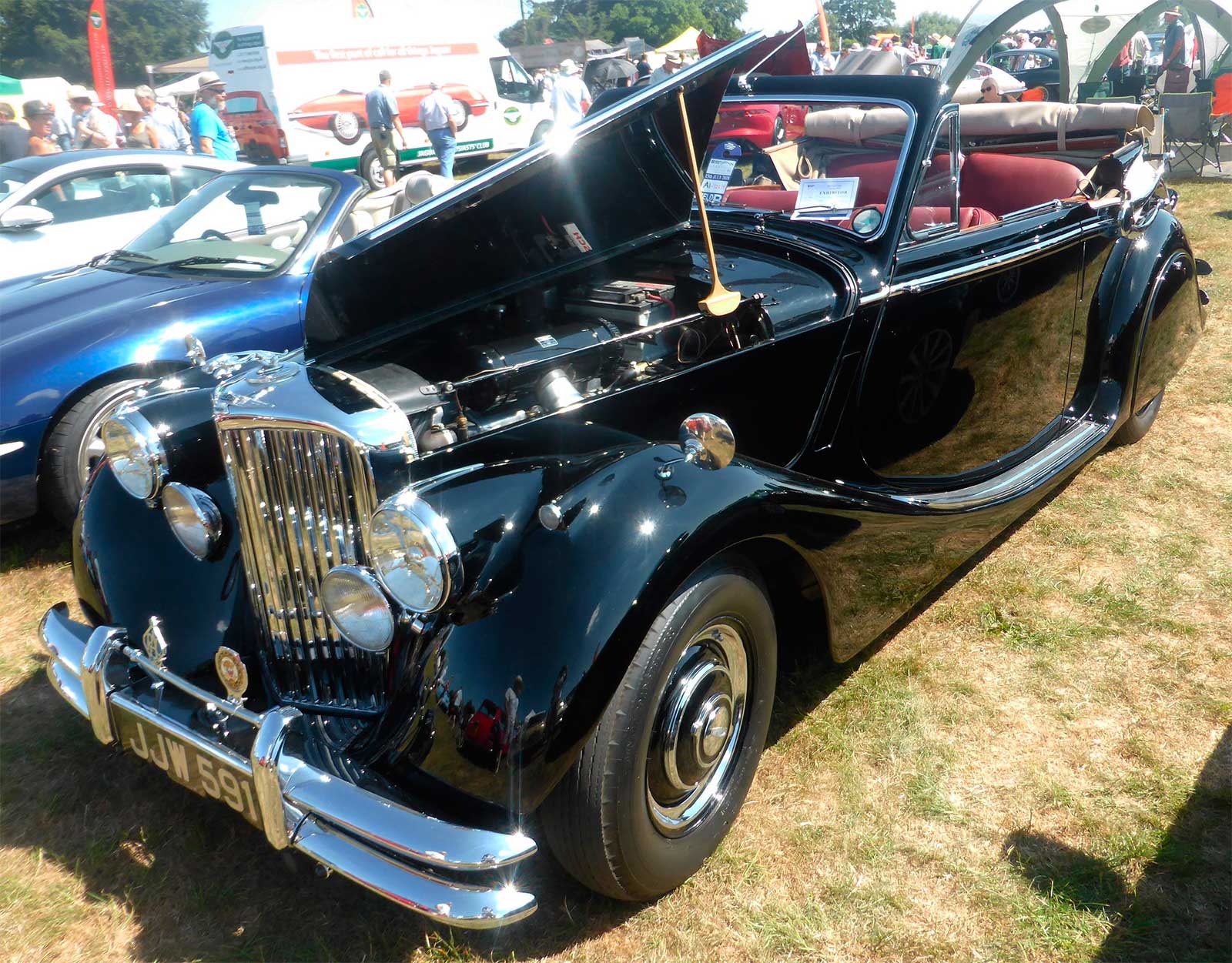 The Jaguar Mark V (pronounced mark five) is a luxury automobile built by Jaguar Cars Ltd of Coventry in England from 1948 to 1951. It was available as a four door Saloon (sedan) and a two door convertible known as the Drop Head Coupé, both versions seating five adults.

It was the first Jaguar with independent front suspension, first with hydraulic brakes, first with fender skirts (spats), first specifically designed to be produced in both Right and Left Hand Drive configurations, first with disc center wheels, first with smaller wider 16″ balloon tires, first to be offered with sealed headlamps and flashing turn signals for the important American market, and the last model to use the pushrod engines

The Mark V was introduced to distributors and the press on 30 September 1948 and launched on 27 October 1948 at the London Motor Show at the same time as the announcement of the XK120, with which it shared a stand. The XK120, though not quite ready for production, was the star of the show. However, the Mark V vastly outsold the XK120 by roughly 5,000 cars per year as compared to 2,000 cars per year for the XK120. Three cars were built in late 1948 and saloon production was well under way at the factory on Swallow Road at Holbrook Lane in the Foleshill district of Coventry by March 1949, though the DHC was delayed for some months, and the last cars were built in mid 1951

While the XK120 had a new overhead-camshaft XK engine, the Mark V retained the 1946-48 driveline including the overhead-valve pushrod straight-6 2½L and 3½L engines, now since 1946 produced by Jaguar, which the company had previously purchased from the Standard Motor Company before the war, and the four-speed single-helical gearbox produced by both Jaguar and the Moss Gear Company of Birmingham. Automatic transmission was not available at this time. The 1½L Standard engine used in previous models was not offered in the Mark V. Claimed power output in this application was 102 bhp (76 kW)[9] for the 2664 cc Mark V and 125 bhp (93 kW) for its more popular 3485 cc sibling.

The chassis frame was new with deep box sections and cross bracing for improved stiffness in handling and cornering, and independent front suspension by double wishbones and torsion bars, an arrangement that would be used by Jaguar for many future vehicles. It has weldments and brackets provided for both Left Hand and Right Hand Drive brake and clutch pedal linkages, so the chassis could be assembled in either configuration. It also had hydraulic brakes, which were necessary with the independent suspension, and which Jaguar had been slow to adopt compared to other manufacturers, and an all pressed steel body on the saloon, though the DHC still had wood framing in the doors. Another new feature was that the rear of the chassis swept over the rear axle to provide greater movement for improved comfort, where on previous models it had been underslung.

The styling of the car followed prewar SS-Jaguar lines with upright chrome grille and the leaping Jaguar radiator cap mascot was available as an option. The Autocar called it rich yet with unostentatious looks, in outline halfway between the old and new. There is a distinct hint of the recently modernised Bentley look in the style of the front grill.

The wheels were 16-inch (410 mm) steel-disc type, significantly smaller than the 18-inch (460 mm) wheels on the MK IV. From the side, a distinctive styling touch on the saloon was a “tuck in” curve at the base of the rear quarter window following the curved profile of the side glass, a feature retained on many subsequent models. Rear-wheel spats (fender skirts) were standard. There was also a drophead coupé version.

The Mark V was available in 12 single paint colors, in various combinations with 7 upholstery colors, but the factory did not offer two-tone treatment, nor did they offer white wall tires. Two cars were done by the factory in two-tone schemes, and 32 others in various special colors, for unknown reasons. Others may have been repainted as two-tone by American dealers before or after the sale, as well as fitting white wall tires 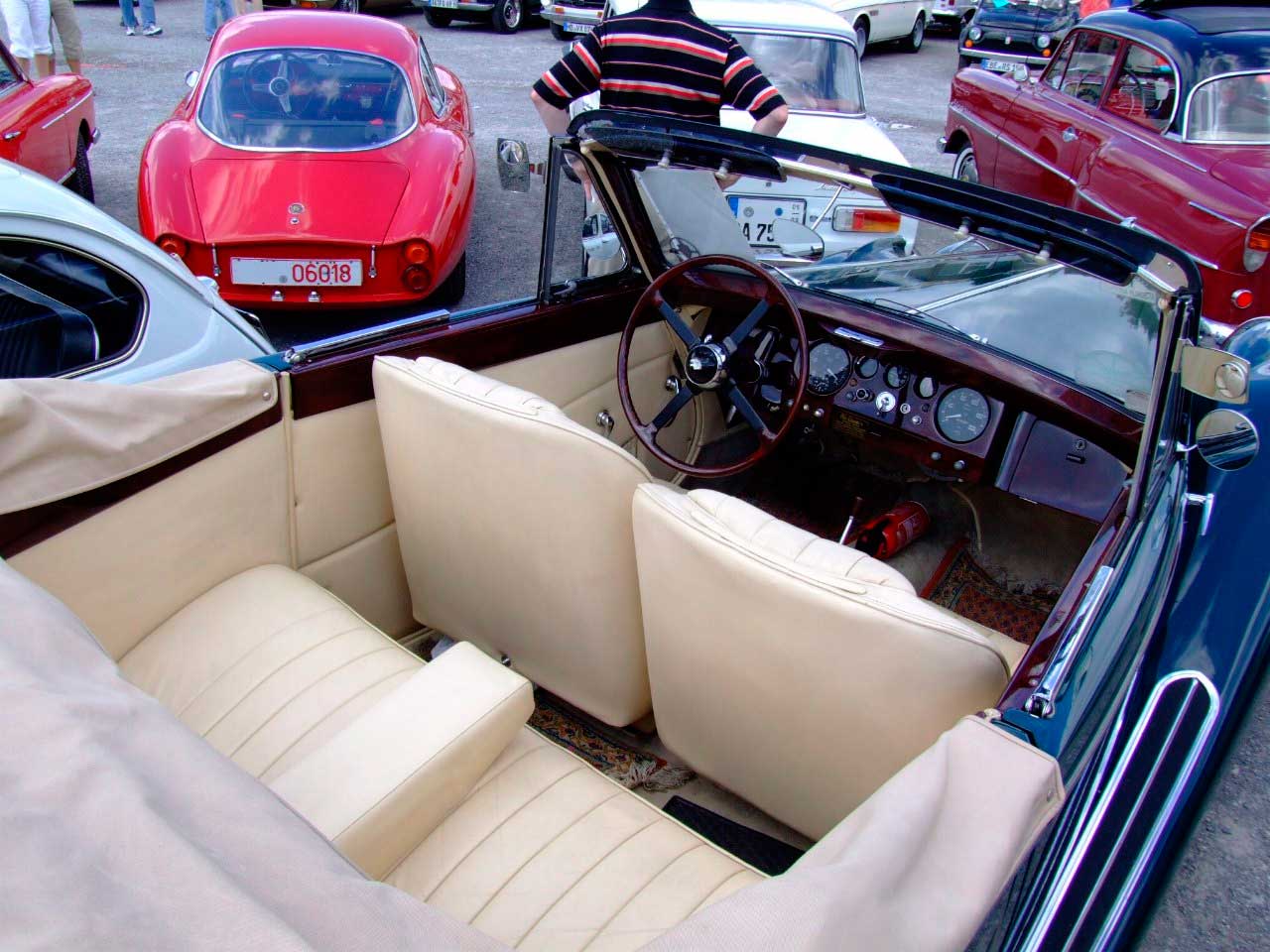